My kids have been completely obsessed with the World Cup this year.   They are pretty big Futbol fans even when its not a world cup year (so hopefully they don’t get the rap that many of us Americans do, about being “once every 4 years” kind of faux soccer fans).   My son got a Team USA Jersey for his birthday and he has been wearing it almost daily.   The only difference on the days that Team USA plays, are that he wants me to paint his face with American flags.   Yesterday was the knock out round game against Belgium, and despite a valliant effort, the US boys came up short – and my kiddos were pretty crushed.   But they got over it pretty quickly with a trip out for ice cream.

While we were out at the ice cream shop, we had not 1, not 2, but 3 different people come up to him with his face painted, and wearing his Team USA Jersey, and they said “awww, you’re so cute – all decked out for Friday!”    We were both like, huh?   Friday?   And they responded with “yes of course, the 4th of July, thats what he’s dressed up for, right?”    Ahhh right…  had almost forgot about the 4th coming up.   Apparently futbol just isn’t for everyone yet, is it.    So yes, we are excited for the 4th of July, just maybe not quite as much as we were hoping for a big Team USA win.   Well, at least we’ll have another shot in 2018.  🙂

In the spirit of the 4th, I came across this super cute tutorial for a very festive, without being too over the top “patriotic” – American Flag made from pallets!   Now thats some upcycled awesomeness right there. 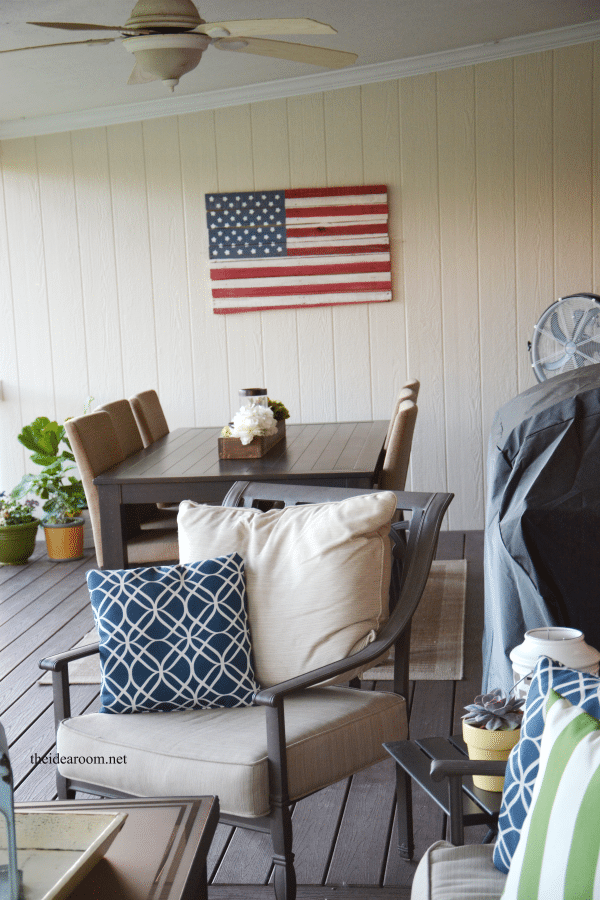 Click on over to the Idea Room to check out the full tutorial!

Happy 4th of July everyone!!

Gorgeous 7 Drawer Dresser – Made from Pallets!!